You’re wondering what is the most played class in Destiny,

then here is Destiny 2’s most played class.

The Hunter class with 36% of the total of the classes is the most played in the game.

The data above comes from straight from Bungie.

Hunters are the most popular class in Destiny: pic.twitter.com/lUklaECo5p

The second out of the three class is Warlock with 34% and Titan with 30% of all the classes combined.

Keep in mind that this data is from 2014 and a lot has changed.
[wd_ads advert=”6060″]
As for the most recent Destiny update, that is Destiny 2, the Hunter class might no longer be in the lead.

A study done by Zippia, indicates that Warlock might succeed the Hunter for the most popular class in Destiny 2.

The research was done in the United States and is already placing the Hunter as the least popular class.

The most popular subclasses ranked by states in the US 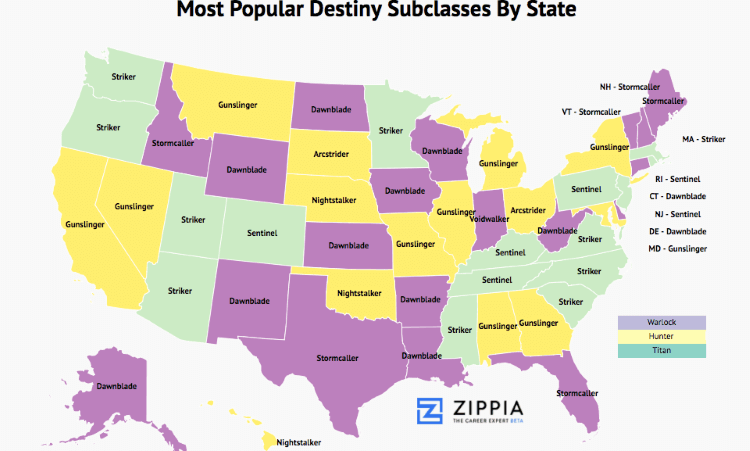 These are the most popular subclasses in the United States. According to Zippia, this website although they are a career website used Google tools like Adwords and Trends to accumulate data to figure out the most popular classes in Destiny 2.

The most popular class is the Warlock’s Dawnblade subclass with 12 states. That is the highest among all the subclasses.

The next subclass followed is the Stormcaller which is the most popular in six states. The least favorite is the Voidwalker with only one state.

That state is Indiana.
[wd_ads advert=”6060″]
As for the Titan, the Striker is the most popular among 10 states.

The Defender subclass is the most popular among the six states.

The least favorite is the Sunbraker with no states at all.

An explanation would be due to the class being so recent, while the Defender and Striker are already established since Destiny 1.

Maybe in the next few years, the data might change for the Titan as players would adjust the Sunbraker into builds and strategies.

The last but not least is the Hunter.

The most popular subclass for the Hunter is Gunslinger.

The Gunslinger is popular among 10 states followed by the Nightstalker with only 3 states.

Finally, the last Hunter’s subclass is the Blade Dancer with only 2 states.

Keep in mind that this is only United States data and not worldwide. The data posted by Bungie might indicate worldwide.

According to Zippia, Warlock’s Dawnblade is the most popular in the United States.

Followed by the Titan’s Straker subclass with 10 favorite states. In this poll, just about 1,400, further proves that the hunter keeps dominating popularity.

Although, if notice, the hunter is not leading by big margins.

What is your favorite class and subclass and why? Let us know in the comments below. For more gaming tricks and tips here.

GTA 5 How to Roll

GTA 5 How to Roll